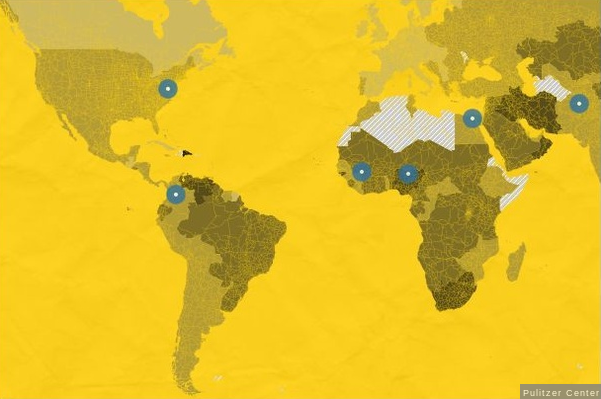 Developing countries have the deadliest roads, with pedestrians at risk too.

According to road safety data from the World Health Organisation, 1.24 million people have died in traffic accidents this year alone. Without improvements or preventative action this could rise to 3.6 million deaths by 2030 warns the organisation.

When you’re moving abroad local road safety is unlikely to be top of your list of things to research, but it could have far-reaching consequences – from which type of car you buy to whether hiring a local driver is necessary.

The majority of road deaths occur in developing countries, with traffic fatalities set to become the fifth-leading cause of death jumping ahead of malaria, AIDS and TB. Nigeria, the Dominican Republic and Iran have some of the highest death tolls.

The Pulitzer Centre for Crisis Reporting has illustrated the data on a colour coded interactive map. Each country is coloured according to the number of road deaths per 100,000 people.

The map shows that while poorer countries make up only half of the world’s traffic, they account for 90% of the total number of road fatalities. The majority of these accidents occur due to poor road quality and the lack of laws or law enforcement.

Nigeria records 33.7 deaths per 100,000 people, one of the highest fatality rates. This is probably partly due to the fact that until recently, Nigerians simply bought a driving licence. The Federal Road Safety Commission has now made it compulsory to take lessons and pass a test in order to receive a licence.

It seems it’s not just those in cars who are at risk, 40% of those killed on Africa’s roads are pedestrians.

Traffic deaths aren’t only a problem in developing countries however. Since the 1970s the United States has made improvements in road safety, now registering 11.4 deaths per 100,000 people, but this still falls behind other rich nations.

Over in Europe the fatality rate remains very low in much of western Europe with 5.4 in Spain, 3.7 in the UK and only 3 deaths per 100,000 in Sweden, one of the lowest rates in the world. As you move towards central and eastern Europe however the rates increase. Poland records 11.8 deaths per 100,000, 13.9 in Romania and 18.6 in Russia.

In 2010 the United Nations adopted a 10-year plan for improving road safety around the world, thereby saving five million lives.