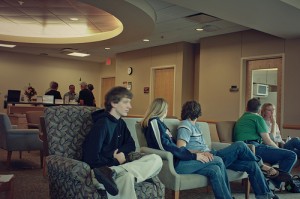 NHS hospitals are imposing “minimum wait times” to save money, found a recent study by the UK’s Co-operation and Competition Panel (CCP). The CCP report said one primary care trust sought to increase wait times from 13 to 16 weeks (patients in England have a legal right to start hospital treatment within 18 weeks of treatment by their general practitioner, or GP). It concluded:

Experience suggests that if patients wait longer then some will remove themselves from the list or will no longer require treatment when it is finally offered. A primary care trust may therefore save money overall by increasing waiting times. We understand that patients will remove themselves from the waiting list either by dying or by paying for their own treatment at private sector providers.

Chief Executive of the UK Patients’ Association, Katherine Murphy, called the minimum waits “a callous and cynical manipulation of people’s lives that should not be tolerated.”

Moral outrage aside, the CCP argued that though this policy may appear to create savings over the short-term, in the long run it may actually drive costs up. The reason is patients who do not receive care promptly often require longer or more expensive treatment than they might have initially. In other words, those who don’t “remove themselves from the list” (whether by choice or otherwise) will themselves send costs higher than if everyone were treated promptly.

The Director of the Primary Care Trust Network, David Stout, said critics are ignoring the larger historical context. “10 years ago people were waiting longer than 18 months,” he said. “Now we have an average waiting time from referral to treatment of about eight weeks so we have improved performance very, very significantly over the last few years.”

Expats are eligible for free NHS care provided they have lived and worked in the UK for at least a year. Some rely on it as an alternative to expensive private insurance plans. Recent years have seen efforts to discourage foreigners’ use of the system, however, and a major criticism of the EU’s Cross Border Healthcare Initiative is that an influx of foreign patients will drive wait times up even further.