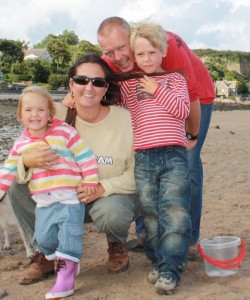 Lisa Sadleir runs a company that assists expats living in Spain, and also blogs about her family’s life abroad.

Local health systems can be intimidating to some expats, who fear language barriers and lower quality care than what they are used to in their home countries. This sometimes drives them to purchase costly private insurance plans or seek care at private clinics.

This is not the case for everyone, however. Lisa Sadleir, who blogs about her family’s life abroad at http://www.familylifeinspain.com, talked to Expat Health about the advantages and pitfalls of the Spanish public health system, as well as what it was like giving birth to her children abroad.

Your family is enrolled in the Spanish healthcare system. Why did you choose this over international insurance?

I have always worked with a Spanish contract and am now self-employed. Since I’m obliged to make monthly social security payments of about EUR 250, the state health care option was the obvious option.

My monthly social security payments entitle my whole family to full medical cover, including dental for the children, so I don’t feel private insurance is necessary. It’s easy to make appointments and children are seen to almost immediately.

Do you ever find it difficult to communicate with doctors or nurses?

I speak fluent Spanish so I don’t have a problem coping with the system. But other people often ask me for help translating. Language is often a barrier for expats as there is not an abundance of English speaking doctors. In my experience, Spanish doctors understand quite well but their limited spoken English leads people to believe they have not been understood, and so they lose confidence.

You on the other hand were confident enough to give birth in Spain. Can you talk a little about that experience?

Both my children were born via emergency caesarian section in Fuerteventura. Facilities were pretty limited (any complication would result in the need for a flight to Gran Canaria), and I was made to lie flat on my back during the whole process of being induced–no alternative methods, position changes or birthing balls.

Were there any problems?

Though both children were overdue and weighed 4.5 kg each, and my water had broken, the doctors did not find it necessary to inspect me until 6 hours after being admitted. Because of that the attending nurse made an error that was not discovered for a long time.

I was induced for 5 hours before the doctor discovered the cord was wrapped around the baby and so induction was futile.

Were you upset about that afterward?

Both children were and still are very healthy so I have no regrets. My only criticism would be of the lack of communication. At no point was anything explained to me. I had to listen to the conversation and translate for my husband.

If you had to do it again would you do anything differently?

I would maybe be more insistent on what I wanted done, demanded a doctor or gynecologist be present from the outset. However it’s difficult to say as pregnancy distorts your normal thinking. I think a birthing partner, somebody who has been through it all before, would be an advantage–especially if they spoke Spanish.

The experience sounds like it was pretty frightening. Hasn’t it tainted your opinion of the Spanish health system at all?

The birth was complicated and my discomfort could easily have been avoided. Had the gynecologist/obstetrician visited me sooner they would have discovered the attending nurse’s error sooner, but I still have two beautiful and health children so no need to complain. It would not be fair to criticize the system for one person’s mistake.

We have never encountered any problems with the Spanish public health system, although we have been very lucky and have not needed anything serious. I have friends who are undergoing treatment for cancer and they cannot fault the service and care they are receiving.

Would you recommend other expats enroll in the state healthcare system then, or only if they are fluent in the language?

No, I would not tell non-Spanish speaking expats to stay clear of the public health system. On a day-to-day basis, the service provided is very good and there appear to be more staff who speak English. However, I think expats should think long and hard when making the decision to start a long and more complicated treatment. Sometimes communication problems can create too many barriers there.

Are there other cases you’d advise expats to obtain private medical insurance?

If you plan to live permanently in Spain and you are not-self employed or employed on a Spanish contract, you really must take out some form of private medical insurance. Too many expats have to return to the UK against their wishes due to the lack of entitlement to healthcare. Don’t make a lack of medical insurance the reason for leaving this beautiful country.

Lisa Sadleir is a happily married mother of two children who has lived and worked in Spain for almost 20 years. She currently lives with her family near Mijas Pueblo in Malaga. Lisa runs a company that assists expats living in Spain, http://www.ccbspain.com, and also blogs about her family’s life abroad at http://www.familylifeinspain.com.