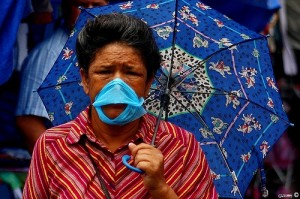 A flu strain resistant to Tamiflu was found to be the result of mutation rather than overuse of the drug.

With the release of Contagion (the apocalyptic bird flu movie), attention is back on the flu’s ability to end life as we know it.

In the movie, a strain of drug-resistant influenza spreads quickly, kills millions, and so on. It seems every time a new strain of influenza is discovered we get the same grim pronouncements of impending doom.

But is the risk really that great?

Researchers recently attempted to answer that question by mapping the spread of an H1N1 (swine flu) strain resistant to the drug Tamiflu (oseltamivir)–the most widely used anti-flu drug in the world.

“Oseltamivir is an important preventative agent against future flu viruses,” said Dennis Chao, lead author of the research paper, which was published in the September issue of the Royal Society journal Interface.

The researchers wanted to explore whether it was possible for a drug-resistant strain of influenza to spread throughout the world a la Contagion. To do this, they used a mathematical model involving 321 cities connected by air travel. They determined the oseltamivir resistant strain likely developed by mutating and then “hitchhiked” with other mutations that made it more easily transmittable.

The research suggested this type of resistance is more likely to develop, and also more dangerous, than the kind that arises with the overuse of flu drugs. In other words, influenza mutates so rapidly there is no reason not to combat it aggressively with drugs.

Ira Longini, a professor of biostatics who also worked on the study, said:

For the next pandemic, we should have all the available drugs at our disposal as a first line of defense to both prevent infection and to treat the most vulnerable. Or else, the chance that the next pandemic influenza strain is resistant goes up.