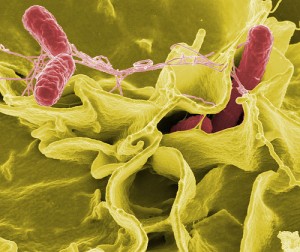 Salmonella is often found in raw eggs and poultry

It seems Europe can’t catch a break these days: a sovereign debt crisis, a deadly e. coli outbreak and now–according to researchers from France’s Pasteur Institute–a drug resistant strain of salmonella. A recent study by Simon Le Hallo and François-Xavier Weill found a strain of salmonella resistant to commonly-used antibiotics has spread from the Middle East and Africa to Europe over the last 10 years.

Salmonella is a bacteria related to the Escherichia genus (the “e” in e. coli stands for “Escherichia”). It is often transmitted through contaminated food or water, and can survive for several months in a moist environment. Salmonella causes temporary illness with stomach symptoms and diarrhea, but as with e. coli the elderly, very young and people with weak immune systems may face more serious complications–even death.

Between 1999 and 2008, around 1.7 million salmonella infections were reported every year in North America and another 1.6 million in 27 European countries. From 2000-2008, Weill’s study found 489 patients in Denmark, Wales, England and France infected with the drug-resistant “S. Kentucky” strain of salmonella.

The study concluded the initial infections occurred in Egypt between 2002-2005 and then spread elsewhere in the Middle East and Africa before arriving in Europe. Contaminated poultry was singled out as a source, particularly in Nigeria, Morocco and Ethiopia.

Publication of this study will generate awareness among national and global food, health and agricultural agencies so that necessary steps can be taken in order to control and stop the spreading of this strain.

He added that the results had already been submitted to various national health laboratories. The best way for expats to deal with salmonella is to avoid it all together by practicing good food hygiene: