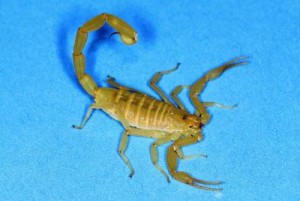 The antivenom was tested against the bark scorpion

Expats living in desert climates in the US and Mexico will soon have one less thing to worry about: scorpion stings. The US Food and Drug Administration just approved a drug called Anascorp–the world’s first ever scorpion antivenom.

Anascorp was developed by Mexico’s Instituto Biocion and underwent clinical trials at the University of Arizona. Though scorpion antivenoms are in use elsewhere in the world (notably the Middle East), Anascorp is the first to undergo controlled clinical trials.

Each year there are some 8,000 scorpion stings in Arizona alone. The creatures also pose a health threat in Latin American, North African and Middle Eastern countries. Children are particularly vulnerable, as scorpion venom often impacts their breathing. Without antivenom children must usually be heavily sedated and are sometimes put on ventilators.

Dr. Alejandro Alagón from the Institute of Biotechnology of the UNAM (National Autonomous University of Mexico) headed up the project on the Mexican side. He is an antivenom researcher, an adviser to Instituto Bioclon and an associate investigator at the UA VIPER Institute. He added:

We have been working together to test the Mexican antivenom under United States rules for close to 12 years, learning a lot from the process and learning from each other. This collaboration has really helped us produce a better product. For this project we needed to combine laboratory science, clinical science and a good manufacturer, and we needed to design a good clinical trial.

The development process involved multiple colleges and departments at the UA; 27 Arizona hospitals and one in Nevada; three poison control centers; American and Mexican students; ranchers and scorpion hunters; businessmen and factory workers; and academic colleagues on four continents.