It’s that time of year again – influenza season has hit the Northern Hemisphere. Many people are rushing to the doctor for a shot of the flu vaccine, hoping to be covered against the strains of the virus that will be in circulation this year. However, this could soon be a thing of the past, as the race is on to develop a universal flu vaccine. 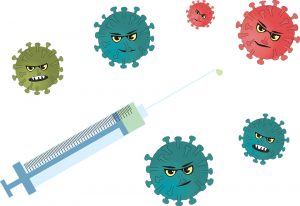 Benefits of the universal fix

Scientists around the world are working on a universal vaccine, protecting against multiple strains of flu virus all at once. This will offer huge advantages over the conventional seasonal flu vaccines, according to the American NIAID (National Institute of Allergy and Infectious Diseases), for example:

The definition of a universal flu vaccine is however somewhat flexible; while the dream goal for some researchers is a ‘once-in-a-lifetime’ injection protecting against all known and emerging flu strains, others are working on solutions that will protect against getting the flu for anywhere from three to 20 years.

Why is it important?

Despite efforts to vaccinate around the world, the WHO (World Health Organization) estimates that the flu virus causes 1 billion infections, 3 to 5 million cases of severe disease, and 300,000 to 500,000 deaths annually. So even modest improvements can save thousands of lives.

Is this goodbye to the flu?

A recent breakthrough is making scientists optimistic for a solution in the near future. As Scientific American reports, one promising study has shown potential to pave the way, with the researchers stating that they may have created the “Goldilocks” of flu vaccines. But even as we get closer to developing better vaccines, other experts state that we’ll never completely eradicate influenza: “We’re managing the risk. The goal is to prevent disease and death, not to get rid of it, because it’s not going to happen.”