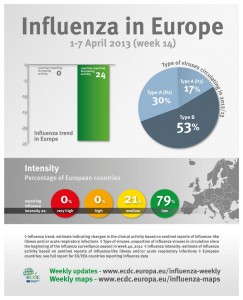 Influenza levels are dropping in the northern hemisphere as flu season comes to an end.

Good news for expats living in Europe, all signs point towards flu season coming to an end. In all reporting countries this week, flu cases continue to decline with some already returning to their levels outside of flu season.

The European Centre for Disease Prevention and Control (ECDC) has declared, after three months of active transmission, longer than previous years, the 2012-2013 flu season is waning.

Influenza activity is continuing to decline in the USA, according to the Centre for Disease Control (CDC). The report states influenza-like-illnesses (ILI) are falling across the country, dropping below the baseline for the first time since December.

This season has been one of the worst for several years, with 110 children killed by ILIs and by the end of January 2013, almost all U.S. states had experienced elevated influenza levels.

Australia is just getting started

For the many other expats living in the southern hemisphere flu season is about to get going. Traditionally it starts it May, running through until October with a peak in August.

Expats living in the southern hemisphere should contact their healthcare provider to enquire about flu vaccinations. Guidelines vary from country to country, but the CDC recommends anyone over the age of six months gets the vaccine. This particularly applies to those at higher risk, elderly people, health care workers and those with compromised immune systems.