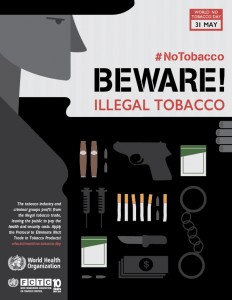 WHO has launched the “Illicit Trade Protocol” in order to eliminate all forms of illicit tobacco trades.

This year, World No Tobacco Day falls on Sunday 31st May. The World Health Organisation use this opportunity every year to remind the global population of the serious health risks associated with smoking.

WHO’s key message is not only to remind people of the risks of smoking, but also that in order to tackle the tobacco battle, the illicit trade industry must be stopped. The growth of illicit trade is allowing criminal groups to prosper and extend their illegal businesses thanks to the money made on illegal tobacco products.

Tobacco kills nearly 6 million people each year, including 600 000 people killed by the effects of second-hand smokers. The number of illicit tobacco products being sold is on the rise, and thus is contributing to the global problem.

What are the goals for this year’s campaign?

WHO has launched the “Illicit Trade Protocol” in order to eliminate all forms of illicit tobacco trades. To become an international law, the protocol has to be ratified by at least 40 countries. This year, WHO are rallying countries across the globe to come together in a bid to tackle the issue of the illicit trade of tobacco products. The reason for this focus lies in the fact that one in ten cigarettes consumed globally is linked in some way to the illicit trade market. This has become an increasing concern not only in terms of general health but also in regards to legislation.

What does “illicit trade” mean?

Illicit, or illegal trade, is the export, import, production, selling or possession of any “tobacco product” that does not comply with the legislation of the country. The forms of trade fall into three categories:

The dangers of illicit tobacco trade

WHO warns of the dangers of this growing market, but how does it affect you and your own interests?