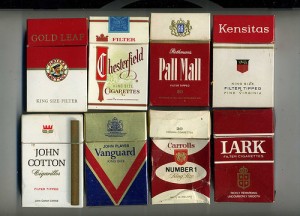 Australia has banned branding on cigarette packing, making images like these a thing of the past.

Effective December 1st, 2012, Australia has banned “the use of logos, brand imagery, symbols, other images, colors and promotional text on tobacco products and tobacco product packaging.”

According to the law, “packaging must be a standard drab dark brown color in matte finish.”

Its goals are three-fold:

Australia’s Minister for Health and Aging, Nicola Roxon, called it “one of the most momentous public health measures in Australia’s history,” saying:

Plain packaging means that the glamour is gone from smoking and cigarettes are now exposed for what they are: killer products that destroy thousands of Australian families.

We know that packaging remains one of the last powerful marketing tools for tobacco companies to recruit new smokers to their deadly products. In the future, cigarette packets will serve only as a stark reminder of the devastating health effects of smoking.

But even in these countries tobacco companies are still allowed to use brand logos and imagery (granted they have to work around the horror show warning pics). Australia is the first country to remove advertising from the picture all together.

Needless to say tobacco firms don’t share Roxon’s enthusiasm for the new law. According to the Associated Press, Philip Morris Asia has already filed suit against the Australian government.

The tobacco giant claims there is no evidence proving plain packaging reduces smoking rates. On top of that the Australian government is required by law to compensate anyone whose property it devalues–a law that includes intellectual property such as logos and trademarks.

Roxon seemed to anticipate this in her statement:

She said big tobacco had “made a habit” of challenging legislation and called on companies to “break it.”

The way we see it, the only sure thing is the Australian government is in for a long and costly legal battle. Whether the country manages to quit tobacco branding cold turkey, only time will tell.

I wish America would do this!