In order to disclose patterns and reveal the best national healthcare systems in Europe, the Euro Health Consumer Index (EHCI) was published by the Health Consumer Powerhouse recently. 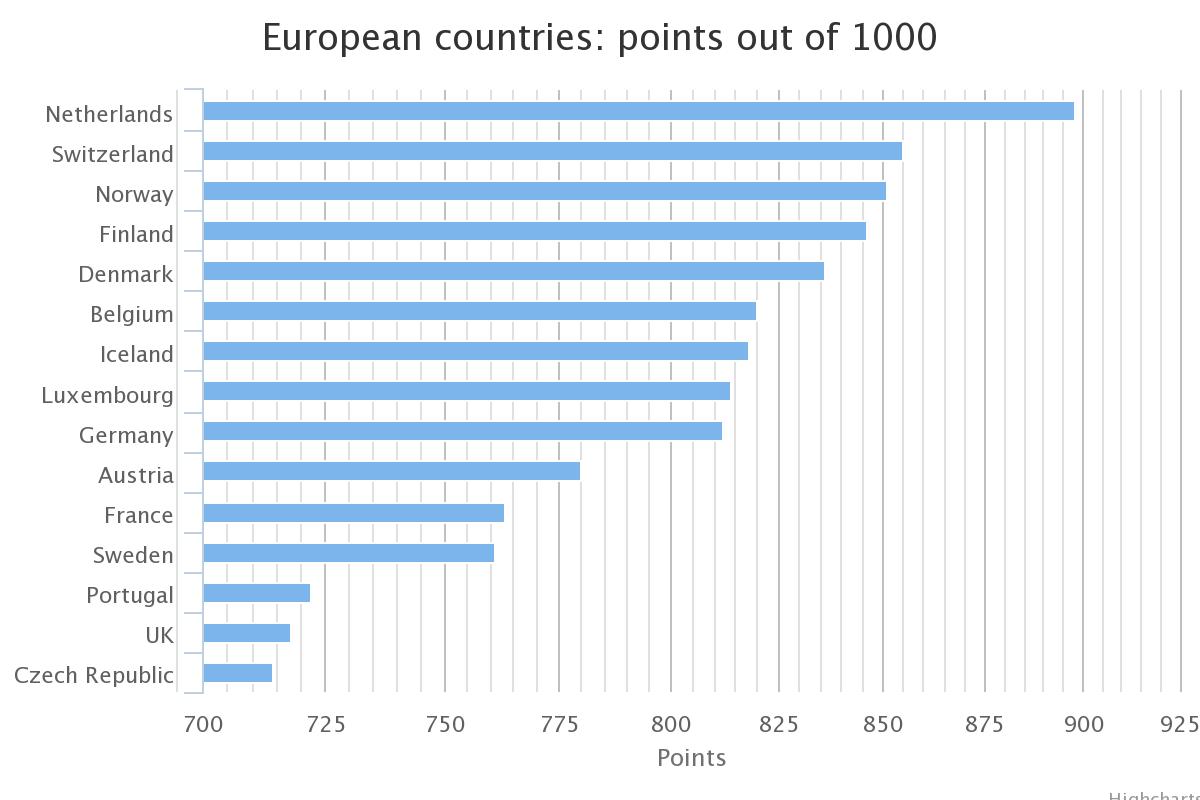 The data was gathered in 2014 for over 37 countries. The report ranks the countries according to the following factors:

The maximum score that could be obtained was 1000 points.

The obvious winner in the ranking is The Netherlands with 898 points, leaving the other countries far behind. Switzerland came in at second place, followed by the Scandinavian countries Norway, Finland and Denmark. The UK, excluding Scotland, comes in 14th position, with Scotland two places behind the UK since it has a separate health service. In 19th place we find Spain and Italy takes the last place position.

Since 2005, The Netherlands have been in the top three countries in every report. So, what are the Dutch doing right? The high accessibility level is a definite bonus, having 160 primary care centres which are open 24/7. Also, the Netherlands are characterized by having multiple providers of health insurance which are acting in competition and are separate from hospitals and other caregivers. Furthermore, the Dutch have the most structured arrangement for patient organisation, participation in policymaking and health care decisions

Due to its isolated location, Iceland has been forced to build its own system of healthcare services. The capability of these systems is to serve a couple of million people, while the Icelandic population only counts for 300,000. Therefore, it is not surprising that Iceland reached 8th place,their only handicap being their location outside of Europe. As Iceland lacks its own specialist qualification training for doctors it has developed a system which benefits their society very well. Recently graduated doctors spend 8 to 10 years outside Iceland to not only obtain the necessary skills, but also to utilise these contacts throughout their career.

This “homemade” health care system is also the case in Luxembourg, however, unlike in Iceland, the ability to capitalize on its central European location exists. Luxembourg has, for many years, allowed its citizens, to seek care in nearby countries.

Germany has experienced a substantial decline falling from 6th place in 2009. Traditionally, the country had a restriction-free and consumer-oriented health care system, as patients could seek almost any type of care, which resulted in quantity above quality focus. Their weakness stems from the greater number of small, unspecialised hospitals.

Austria is now on the rebound, since its drop in ranking in 2013. However, the introduction of the abortion indicator did not pay off for them. Although abortion is not banned in Austria, like it is for example in Poland, it is not generally carried out in the healthcare system. Whether Austria should be ranked neutral or negative is a matter of opinion.

Sweden, France and Austria make an interesting trio, scoring 30 points less than the top nine but keeping 40 points ahead of the followers. Despite Sweden’s long associated tradition of steering patients away from taking up their doctor’s time unless in dire circumstances, the country scores fairly high on the prevention sub-discipline. Similarly to Austria, Sweden also lost points after the introduction of the abortion rate indicator. Together with only a couple of Central and Eastern Europe countries, Sweden has more than 30 abortions per 100 live births. In comparison, Russia had 95 abortions per 100 live births, a rather shocking statistic. This is due to the fact that in Russia, abortion is still used as a common contraceptive. Another thing that should be noted is that the EHCI takes a critical view on the four countries that execute a legal ban on abortion: Ireland, Cyprus, Malta and Poland.

With this, it is a couple of points ahead of the UK. Since a couple of years a separation between England and Scotland, listed two places below, had to be made. This was done on the basis of the existence of Scotland’s own National Health Service and the Scottish healthcare spend per capita being 10% higher than the English. Even though the EHCI reports that the UK is still part of European waiting list territory, the report and English press reports on health care state that the waiting times have been worsening slightly in 2014.

The highest ranking among the Central East European countries has been assigned to the Czech Republic for years.

Overall, the report states that the health care provision has improved in almost every country in Europe and is now offering more than 500 million people better healthcare.

The full report including more detailed data is available here.