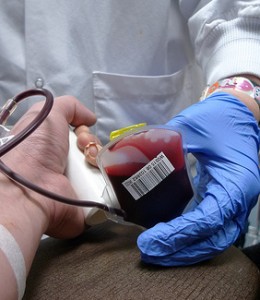 A new law would allow expats to donate blood in Russia.

As resident foreigners, expats are usually excluded from some aspects of local life. They aren’t often allowed to vote, for example.

But expats living in Russia may soon get a new privilege: the right to donate blood.

According to a report on RT.com, Russia is desperate for blood donations. Moscow has the most blood on hand and that still only covers 70% of its needs.

So a new law has been proposed to expand eligibility for blood donations to include expats. The story quoted Lyudmila Stebenkova, Head of the Moscow Duma’s Public Health Committee, who said:

The draft law says that any person will be able donate blood. So, for example, if a migrant comes to a blood-donation center and the doctors refuse to take their blood, he or she can go to court and certainly win the case.

But the new law goes further than that. In fact, if it passes pretty much everyone in Russia will be eligible to donate blood… including the homeless (!) This has sparked concerns about HIV and other bloodborne diseases among certain health professionals.

Despite some obvious shortcomings, we see the new law as positive for expats. It gives them an opportunity to give back to their host country.

Elsewhere in the world, blood drives are popular charities within expat communities. Expat organizations have sponsored donation drives in a number of countries, including China and Indonesia. Perhaps those in Russia will soon be joining them.