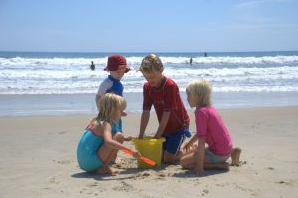 Expat children who move to sunnier countries need to be educated on sun protection.

Evidence suggests that children who suffer sun damage at a young age have a higher risk of developing melanoma later in life. A group of scientists at the National CancerInstitute in Maryland found that young mice, whose skin was engineered to mimic human skin, developed melanoma as adults when exposed to UV radiation as young mice.

The majority of information about sun protection for children is “targeted at parents not at children” themselves, says Bevis Man of the British Skin Foundation.

Dr. Sophie Balk, is an attending pediatrician at the Children’s Hospital at Montefiore and a Professor of Clinical Pediatrics at the Albert Einstein College of Medicine, both in New York. She told Reuters Health she tries to change children’s attitudes towards skin protection by “educating children and their parents” about the dangers of sunburn.

She added “We need more media messages, more role models, more public health campaigns. As a society we could be doing more to promote skin cancer prevention and skin protection.”

It is natural that children want to play outdoors and one of the reasons people move abroad is to give them this opportunity. All this time spent outdoors or on the beach may be such a luxury that sun protection falls by the wayside.

A survey published in the journal Pediatrics asked 360 10-11 year-olds about their use of sunscreen and time spent in the sun. Three years later the same students answered the same questions. The number of them using sunscreen regularly had dropped by 50%.

If public health campaigns and media messages are targeted at kids this will hopefully set them up with healthy habits from an early age.