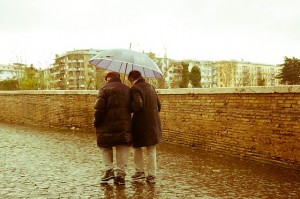 The study looked at nearly 140 Belgian patients half of whom are bilingual and who all had a probable risk of developing Alzheimer’s. The researchers observed a difference in the age at which symptoms first appeared – while monolinguals developed symptoms at 71.5 years of age, bilinguals didn’t show signs of Alzheimer’s until 76.5 years old.

These results, published in the journal Bilingualism: Language and Cognition, confirm previous findings linking bilingualism with slower cognitive ageing. In general, studies agree keeping your mind active as you age will slow brain degeneration and delay the onset of Alzheimer’s.

While Alzheimer’s can have genetic risk factors, increasing numbers of experts are saying preventative measures have an impact on the start of symptoms. Older people should be encouraged to stay mentally active, this could include boosting social engagement, exercising, following a dietary regime, or completing puzzles such as crosswords on a regular basis.

Bilingualism and actively having to control two languages is “like a workout for the brain that challenges our grey cells and keeps them from degenerating,” said researchers.

Alzheimer’s disease is one of the most common causes of dementia among adults and it’s estimated that by 2015 850,000 people will be living with dementia in the UK. Currently there is no cure for dementia, including Alzheimer’s disease. With the growing evidence supporting preventative measures in delaying dementia, older people should be encouraged to keep mentally active.