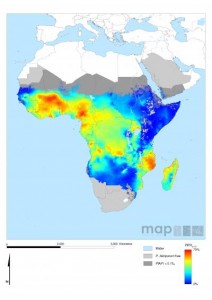 A new "malaria altas" shows where the disease is worst; click to enlarge.

Malaria is the world’s deadliest disease, posing a serious health threat in African and South American countries. Even expats are at risk for catching it. All it takes is one mosquito bite, which is why many countries in sub-Saharan Africa recommend courses of anti-malarial drugs before arrival.

Now a multinational team of researchers has created a “Malaria atlas” to better track the disease’s spread.

The project is the result of a two-year effort by the Wellcome Trust to assemble all the data available worldwide on Plasmodium falciparum malaria, the deadliest variety. In addition to information on the disease itself, the atlas also used data on climate and population. The exact results and methodology were published in Malaria Journal, but the maps are available for free online.

Sir Richard Feachem, Chair of the Malaria Elimination Group, said they are an important tool for fighting the disease:

From the perspective of elimination, the key message is that malaria transmission is actually very low across large swathes of the endemic world–including the 36 countries currently engaged in elimination programmes. Mapping transmission levels in detail helps to guide these initiatives and highlights how, with concerted effort and sustained financing, we can continue to shrink the malaria map.

These new maps and our online portal are really aimed at everyone involved in the battle against the disease: from the major international organisations and funders, to other scientists, to those actually doing the disease control work on the ground.

For the rest of us they provide a better perspective on how dangerous a disease malaria really is. In some African countries, for example, as many as 70% of children may be infected with malaria. And on a more practical level a quick glance at one of the team’s maps will help travelers decide whether they’ll need anti-malarial drugs on their trip.