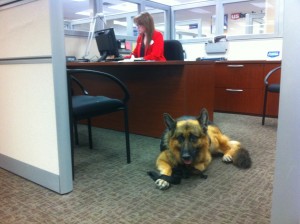 Bringing your pet to work is said to reduce stress and increase productivity for overseas workers.

Did you know that stress has been known to be a major contributor to employee absenteeism? Overseas workers and expats in a new working environment are perhaps the most likely to be affected by stress, leading to low morale and a decrease in employee productivity. This will have a negative effect on any company. So what can be done?

Studies show that the presence of pets in the workplace can actually increase job satisfaction (rather unsurprisingly), improve collaboration among employees and finally boost productivity.

What effect to pets have in the workplace?

The presence of pets in the workplace are supposed to have a particularly calming effect on over stressed workers.

Malcolm Gunning, the principal of a business in Australia said: “I think what it does, is that it creates a very balanced environment. Real estate sales, particularly, is stressful. You’re dealing with large assets. It’s often not straightforward. But the dogs are the calming effect. They’re the balance.”

Bringing your pet at work also forces you to take more frequent short breaks which are in fact recommended for the increase in productivity and focus.

Take your dog to work day

The sponsor Pet Sitters International launched the “Take Your Dog To Work Day” in 1999 in order to promote this new trend across 300 hundred companies. The event has since been growing in popularity and now thousands of companies get involved each year.

As a result of this campaign, there are certain companies which allow workers to bring their pets to work as general practice. (You might want to bear this in mind when looking for your next international career!)

Can you imagine bringing your dog to work and do you think it would improve your productivity? If you think so, it’s time to convince your boss!