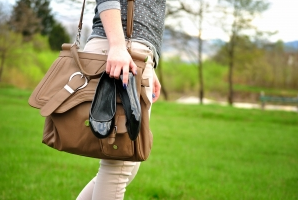 A recent study has found 33 percent of women never clean their handbags. Traces of bacteria, including E.coli, known to cause food poisoning were found in swabs taken from bags.

In addition to E.coli, swabs showed Coliform bacteria, commonly found in the faeces of warm-blooded animals. Faecal Streptococcus, which can cause pneumonia and meningitis was also identified.

Aside from the 33 percent of women who never clean their handbags, many admitted to carrying dirty underwear and used tissues everyday as well.

The researchers say the study highlights the dangers of eating loose chewing gum, or putting a pen from your bag in your mouth.

Handbags aren’t the only victims of poor hygiene. Scientists have repeatedly pointed to smartphones and tablets as being germ havens. In a recent Which? study millions of bacteria were found to be living on touch screens, in some cases 20 times more than found on a toilet seat.

In 2011 the London School of Hygiene and Tropical Medicine released a study showing one in six mobiles in the UK had traces of faecal matter on them. The contamination was attributed to poor hand-washing, though 95 percent of people questioned claimed they washed their hands with soap where possible.

Apple and other manufacturers actively discourage the use of disinfectant on touch screens as it can damage them.

Which? editor Richard Headland, said, “It’s shocking that a smartphone or tablet can harbour more germs than a toilet seat. Gadgets should be cleaned regularly and thoroughly to avoid germs that could lead to illness.”

He recommends a damp, soft, lint-free cloth rather than detergents. Manufacturers warn people not to use alcohol based cleaners on screens as they can damage them.

New York based company, Corning, is currently developing an antibacterial glass for smartphone and tablet screens. The glass – expected to be released later this year – would kill nearly 100% of bacteria on its surface, and prevent new bacteria from developing, Corning’s spokeswoman Elizabeth Dann explained.