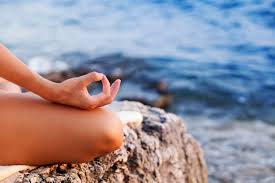 The ancient teaching of meditation is historically associated with Buddhist teachings and the path to enlightenment. Nowadays, meditation has become a more “mainstream” practice in an attempt to boost well-being, relaxation, positive energy, consciousness of your mind and body, amongst other things.

It’s a cliché, I get it; but according to scientific research, meditation goes beyond the mere idea of fully connecting with your body, and actually leaves you feeling generous, patient, compassionate and more forgiving. The most common type of meditation practiced is known as mindfulness technique, which focuses on the present; the motto is to let go of the distractions and worries of the past and the anxieties of the future; it is about being in the moment. This is why it has proven to have health benefits for those suffering from anxiety and depression.

Meditating your anxiety away

People suffering from anxiety disorder have one main issue: too many worrying thoughts taking over their brain. Unable to control these thoughts, anxiety sufferers enter a vicious worry cycle where everything becomes too much to deal with. These worries, for example being late for work, having to cook dinner, giving a speech or having to socialise, despite seeming somewhat trivial, can spiral out of control and take over the sufferer’s life.

That is why mindfulness techniques work perfectly for improving anxiety. Being able to control where your mind wanders through breathing and focusing on the present has proved to help reduce anxiety in people suffering from the disorder.

There are an estimated 350 million people suffering from depression around the world, making it one of the most common mental health illnesses. In a study carried out by researches from Cambridge, people with clinically diagnosed depression were separated into two groups. One group received their normal treatment, while the other was taught mindfulness-based meditation. By the end of the research, only 22% of the group who carried on with normal treatment did not relapse, whereas 64% of the mindfulness meditation group didn’t.

Meditation helps focus, so that the mind doesn’t wander off and potentially plummeting into a pit of despair.. The idea is to connect with the body, think positively and let all the stress and negativity float away, which is why it can be helpful for people suffering from depression.

We have extensively written about how expats are prone to mental breakdowns due to the stress of adapting to a new country. So, could meditation be the way to change this? Perhaps. While many studies have suggested that meditation helps improve health generally, others say it actually does little to nothing to improve anxiety, stress or depression. It’s down to the person practicing it, and whether they believe in it, and are disciplined enough to follow through with it on a daily basis.

There are, of course, added benefits to meditation other than just reducing stress including improved posture, organisation and thought control. Thankfully, meditation has no side effects, it’s harmless, it’s free, and gives you an excuse to take at least 10 minutes out from your busy schedule. So what are you waiting for? Sit back, relax and enjoy the ride.

[Image: Take Back Your Health Conference]