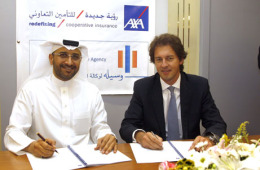 AXA Cooperative Insurance has partnered with Saudi Arabia’s Wasilah Insurance Agency to sell various products, including medical insurance. Under the agreement Wasilah will market AXA’s products in the Kingdom. Products will be geared toward both individuals and small businesses.

We see tremendous growth coming from [the Saudi market]. We were very pleased to be granted our insurance license last year. Wasilah Insurance is a fitting partner to promote AXA Cooperative Insurance’s products and services in the Kingdom and they will be a key contributor towards our gaining dominance in the personal and SME lines of business. [This venture] should represent as much as 15% of AXA Cooperative premiums in 3 years.

The Saudi market is one of the largest in the Middle East and North Africa. Gross written premiums in Saudi Arabia rose from SR 14.6 billion to SR 16.4 billion in 2010, a 12% increase. The year before they had risen 33%.

The Saudi market for private medical insurance is attractive for a number of reasons. The country’s population of 28 million makes it much larger than other Gulf countries, for example. And as with other countries, Saudi Arabia is encouraging citizens to register for private health insurance to reduce the cost burden on the government.

“This partnership shows that AXA will continue to invest in the region and our focus will be to seize the huge potential this market has to offer,” said Droesch.

Wasilah, which will be responsible for selling AXA’s products in the Kingdom, will operate through a headquarters in Riyadh and 10 other points of sale. These are set to open over the next 3 years.

AXA is French insurance company operating around the globe. The name AXA was selected because it is easily recognized and pronounced in most languages. In 2010, AXA was ranked 9th on Fortune’s Global 500 list. Bloomberg consensus estimates forecast a significant improvement in AXA’s 2011 and 2012 revenues compared to 2010. http://www.axa.com