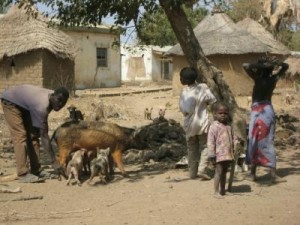 A village in Cameroon where 89% of livestock were found to be infected with swine flu.

Scientists from UCLA found swine flu (or H1N1) is becoming common place in many African villages. In one village in Cameroon, 89% of the animals were infected with the virus.

The discovery has researchers concerned because the more the virus mixes in pigs, the higher the chance it will mutate into a strand highly fatal to humans. Previous flu pandemics, such as the one in 1918, killed tens of millions.

Kevin Njabo, a researcher in UCLA’s Department of Ecology & Evolutionary Biology and Associate Director of the Center for Tropical Research, commented:

I was shocked when we found out it was H1N1. Any virus in any part of the world can reach another continent within days by air travel. We need to understand where viruses originate and how they spread, so we can destroy a deadly virus before it spreads. We have to be prepared for a pandemic, but so many countries are not well-prepared—not even the United States.

H1N1 triggered a human pandemic in the spring of 2009, infecting people in more than 200 countries. In the US alone it led to an estimated 60 million illnesses, 270,000 hospitalizations and 12,500 deaths, according to the Centers for Disease Control. H1N1 is made up of genetic elements of swine, avian and human influenza viruses.

Njabo and his colleagues randomly collected nasal swabs and blood samples from domestic pigs from 11 villages to test for swine flu. Nasal swabs can detect a current infection, and blood samples reveal past exposure to a virus. Ironically, the scientists concluded the infected pigs had gotten the virus from humans.

The fact that pigs in Africa are infected with the H1N1 flu virus illustrates the remarkable interconnectedness of the modern world with respect to diseases. The H1N1 virus that we found in livestock in Cameroon is virtually identical to a virus found in people in San Diego just a year earlier, providing an astonishing example of how quickly the flu can spread all over the globe.

Hence, even diseases in small African villages should be of great concern to the rest of the world:

The world is a global village; no area is truly isolated […] There are so many unknowns about the transmission rates of viruses between humans and wild animals. We have to expand screening.

In addition to studying pigs, Njabo and colleagues have collected samples from hundreds of wild birds, ducks and chickens in Cameroon and Egypt. Their colleagues at other institutions are conducting similar studies in China, Bangladesh and elsewhere.

Njabo is also reporting his findings to Cameroon’s Ministry of Livestock, Fisheries, and Animal Industries to try and help reduce the virus’ spread. In the future he plans to hold workshops to help teach farmers how to raise healthy animals.

“We need to be very vigilant,” he concluded.