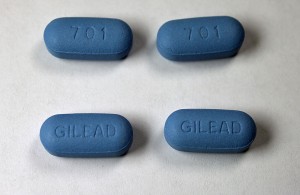 In 2012, the Food and Drug Administration (FDA) in the United States approved the antiretroviral drug Truvada for daily use as a preventative measure against HIV. People without HIV that are at a considerable risk of contracting the virus could take one pill a day, which would reduce the risk of getting infected with HIV by 92%, according to earlier studies.

However, so far the U.S. is the only country where the drug is approved for preventive purposes. In other parts of the world, Truvada is used in combination with other drugs to treat  HIV positive people only and is not prescribed for people without HIV.

The pill has shown very few side effects and it’s been proven to decrease the risk of an HIV infection dramatically. This would make it an option for people that are at high risk of contracting HIV, such as people who work in the sex industry or people that are in a relationship with someone that is HIV positive.

This prophylactic use of antiretroviral drugs is also called PrEP (pre-exposure prophylaxis), which should not be confused with PEP (post-exposure prophylaxis) treatment that in many cases can prevent someone from contracting HIV when taken within 72 hours after (possible) exposure. PEP is already available in most Western countries.

Even though extensive research in the U.S. has shown that the pill is relatively harmless and is highly protective against HIV, there are no countries other than the U.S. that have approved Truvada for prophylactic use. A reason for this is that there remain several unanswered questions about the drug and its effects.

Some health care systems, such as the NHS in the United Kingdom, said that they are worried that people are more likely to stop using other forms of protection, such as condoms, which are still the most effective preventative method. This might not lead to an increase in HIV infections, but it could cause a rise in other STIs. When HIV positive people have other STIs this could make their treatment for HIV less effective.

Also, there is a risk of the virus being resistant to Truvada when a HIV negative person that takes the daily pill does get infected despite all the taken measures. It also only works sufficiently when it is taken every single day.

Apart from these worries, the pill is also very expensive. The cost of Truvada can go up to £9,000 per year and it isn’t clear whether insurance companies would cover it. Considering the fact that it is used to prevent infection with a disease instead of as a necessary treatment, this is a lot of money for most of us.

These days, more than 35 million people are living with HIV worldwide, with an estimated 2.1 million people that were newly infected in 2013.  Thanks to the many treatments that were developed in the last decade, many of these people can live long and healthy lives.