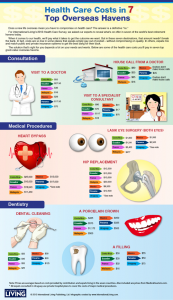 Seven retirement destinations offering healthcare from as little as $30 a month.

Retirees considering moving abroad don’t need to be concerned about health care costs. Some top retirement destinations offer high-quality healthcare from as little as $30 per person per month, a new report from InternationalLiving.com has found.

In Costa Rica, expats can take advantage of the universal healthcare system. Residents pay into the scheme depending on their income, but it normally ranges between $30-$90 a month. This includes prescriptions, doctor’s visits, testing, surgery, and most other health care needs.

The quality of healthcare in Costa Rica is high, evidenced by its popularity as a medical tourism destination.

Uruguay also scored well, being described as “the Switzerland of South America”. Expats will find highly-trained doctors and world class facilities. Many doctors train abroad in the US, Germany or Brazil.

Doctors in public hospitals often don’t speak English, so expats who don’t speak Spanish may want to take a friend along as an interpreter.

In France expats can enroll in the sécurité sociale, France’s universal healthcare system. Both the public and private systems provide excellent care. The public system pays around 70% of most medical costs.

Most residents also buy additional private coverage, a mutuelle, to cover all or part of the remaining costs.

Malaysia is one of the world’s busiest medical tourism destinations, its high quality and affordable facilities attract thousands of patients annually. For example, a check-up at the doctors office costs around $16, the same as a house call. A hip replacement, in America would cost $80,000, in Malaysia it costs around $20,000.

Other countries which featured on the list were Ecuador, Panama, and Mexico.

For older people moving abroad can be a dream retirement, but healthcare is always a consideration. These countries offer high-quality care and a good general standard of living at affordable prices.