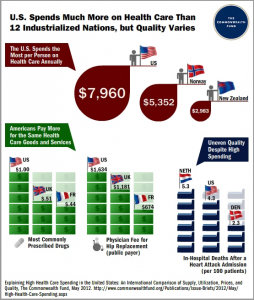 In a recent study, the U.S was found to spend significantly more on healthcare yet the quality wasn't noticeably better.

According to a new study, the United States spends more on healthcare than 12 other industrialized countries. In spite of this, the quality is not obviously higher than those countries who spend less. In the U.S spending is linked to a higher price for treatment and greater use of medical technology, not hospital stays or doctor visits.

The report, entitled Explaining High Health Care Spending in the United States: An International Comparison of Supply, Utilization, Prices, and Quality was published by The Commonwealth Fund. It found the U.S spent nearly $8,000 per person in 2009 on healthcare services. Other countries in the study spent one-third (Japan and New Zealand) and two-thirds (Norway and Switzerland) as much.

This spending amounted to more than 17% of gross domestic product, compared with 12% of less in the other countries in the study. Japan had the lowest spending which came out at 9% of the GDP.

The high spending in the U.S doesn’t appear to be linked to a greater supply or utilization of healthcare services, according to the study. In 2009 there were 2.4 physicians per 100,000 of the population, fewer than all the countries in the study, except Japan. There were also fewer doctor consultations (3.9 per capita) of any country except Sweden.

Relative to the other countries in the report the U.S also had fewer hospital beds, shorter lengths of stay for acute care and fewer hospital discharges per 1,000 of the population. Hospital stays in the U.S were more expensive than most other countries – more than $18,00 per discharge. The cost per discharge in Canada was $13,000, while in Sweden, Australia, New Zealand, France and Germany it was less than $10,000.

Medication more expensive in the U.S

Prices for the 30 most commonly used prescription drugs were a third higher in the U.S compared with Canada and Germany, and more than double the amount paid for the same drugs in Australia, France, the Netherlands, New Zealand and the UK.

“It is a common assumption that Americans get more health care services than people in other countries, but in fact we do not go to the doctor or the hospital as often, said author David Squires, senior research associate at The Commonwealth Fund.

“The higher prices we pay for health care and perhaps our greater use of expensive technology are the more likely explanations for high health spending in the U.S. Unfortunately, we do not seem to get better quality for this higher spending.”

Survival rates vary in the U.S

The report shows the U.S has the highest survival rates for breast cancer as well as the best survival rates, along with Norway, for colorectal cancer. However, cervical cancer rates in the U.S were worse than average.

Compared with other countries in the study the U.S had a high number of asthma-related deaths among people aged 5 to 39.  Both the U.S and Germany had very high rates of amputations due to diabetes.

All the countries in the study, apart from the United States, offer universal healthcare and all struggle with rising health costs. The healthcare spending in the U.S stands out – if the U.S were to spend the same share of its GDP on healthcare as the Netherlands, the country spending the next largest share of GDP, it would have saved $750 billion in 2009.

The Japanese healthcare system shares similarities with the U.S one but the country had the lowest spending rate of the group ($2,878 per capita in 2008). Japan operates a fee-for-service system, while offering unrestricted access to specialists and hospitals. Rather than containing costs by restricting access, Japan instead sets healthcare prices to keep total spending within a budget allotted by the government.

In the U.S individuals negotiate costs with healthcare providers. This leads to complexity and varying prices for the same goods and services, according to the report.