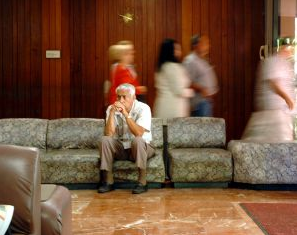 A hospital in Kuwait is testing a new system separating treatment for locals and expats.

Expats make up two thirds of the population of Kuwait. Coming from all walks of life, one thing they share is a need for access to healthcare. In March this year Kuwait’s Health Ministry approved a proposal to designate specific hours for nationals and expatriates to access medical care.

The first hospital to implement the policy began this week. Under the plans, nationals will be given priority in state hospitals during the morning and expats will only be able to access care in the afternoon, unless it is an emergency.

The rules extend to medical staff as well. Kuwaiti doctors will work in the mornings with expat doctors practicing in the afternoons.

Jahra Hospital, to the west of Kuwait City, will carry out a six month trial of the separation plan to see how the system works. If it is deemed a success it will be rolled out in all public health facilities.

The decision came after complaints from Kuwaitis of long waiting times due to the number of expats seeking medical care. The move is seen as favourable to Kuwaiti nationals, while reducing the level of care given to expats, who will have less time to seek medical attention.

The health system is not the first to implement such rules as a number of governmental agencies have similar systems in place. The traffic department for example, only handles applications from foreigners in the afternoons.

Currently, Kuwaitis receive free healthcare while expats have to pay $175 each per year and there are additional costs for services such as X-rays.

The new scheme is one of several policies aimed at reducing the Gulf state’s dependence on expatriate workers. There has also been talk of introducing an income tax which would impact on foreigners’ wages and cost of living in the state.

Activists in the country are against the move however, with lawyer and writer Mohammad Abdulqader Al-Jassem describing it as “racial segregation” on Twitter. Human Path Organisation secretary Taher Al-Baghly told reporters when the proposal was revealed in February that it was discriminatory.

“The health service will not be equal, because consultants work in the morning and this will lead to variations in service levels,” he said.