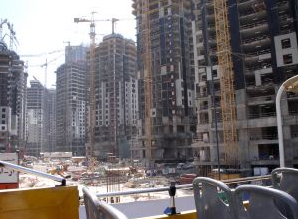 Health screenings of expat workers in their home countries have halved the number of communicable disease cases.

Health officials in the UAE have declared the initiative to carry out medical health checks for expatriate workers, before they enter the country, a success. The UAE’s experiment to screen foreign workers in their home countries for infectious diseases has proved to be successful, Dr Mahmoud Fikri said at a recent meeting. The number of positive cases of certain diseases has decreased by half.

The plan to screen expatriate workers for certain contagious diseases was introduced in October 2011. Without a clean bill of health workers wouldn’t be granted work visas for the state. The UAE is country that relies on expatriate workers to fulfill many jobs. In fact, recent figures state that Emiratis are outnumbered 11 to 1 by immigrants.

The screening started with people from Sri Lanka and Indonesia. The guidelines will gradually grow to encompass people from other countries. “The results of tests revealed that about 50 percent of the total number of persons screened in their home countries had tested positive for infectious diseases, particularly for tuberculosis”, noted Dr. Fikri, assistant undersecretary for the Ministry of Health for Health Policies.

The aim of the policy is to reduce the number of workers coming to the emirates, undergoing medical checks in the country and then being turned away once they are proved unfit for work. Dr Fikri added, in the future they aim to create an electronic network to link screening centres in the countries of origin, the Ministry of Health in the UAE and one in Riyadh, Saudi Arabia.

Currently, people who test positive for HIV, hepatitis B and C or tuberculosis are refused a work permit and can be deported if they are currently in the country. This policy of automatic deportation has been criticized domestically and internationally, especially for TB sufferers. There are concerns it will push TB underground as people won’t seek treatment for fear of being deported.

Hopefully the policy for testing potential expat workers before they arrive in the country will continue to reduce the number of deportations and positive incidents of transmittable disease.