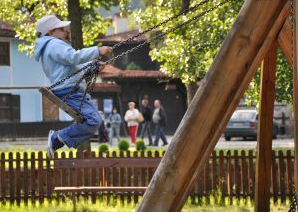 New research has linked childhood obesity rates with the neighbourhood in which people live.

Childhood obesity is increasing in the western world – nearly 18% of school age children in the US are obese. The rate of obesity there has more than tripled in the last 30 years. Children who are obese are at greater risk of heart disease, type 2 diabetes, stroke and of suffering from obesity as adults.

A new study indicates that where a child lives, walkability, proximity to good quality parks and access to healthy food, has an important effect on obesity rates. Researchers have found that children living in favourable neighbourhoods have 59% less risk of being obese.

The study, published in a special themed edition of the American Journal of Preventive Medicine, is one of the first studies that looks at a combination of nutrition and environment when assess children and their parents.

Researchers used geographical information system (GIS) data to look at neighbourhoods in San Diego and Seattle. An environment’s “nutrition” value was based on supermarket availability and the concentration of fast food restaurants. Physical activity environments were defined based on factors related to neighbourhood walkability and at least one park with amenities for children.

“Everyone, from parents to policymakers, should pay more attention to neighbourhoods because they could have a big impact on weight.”

Expats might want to consider that their choice of neighbourhood may well impact on the health of their children. Areas that scored highly on the nutrition and physical activity scales had lower rates of obese children, and children living in these areas were also marginally less likely to be overweight. This is compared with children living in neighbourhoods that had low scores on the nutrition and physical activity scales.