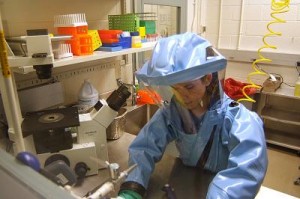 Researchers have discovered a new Ebola-like virus, Lloviu virus, in bats from northern Spain. Lloviu is the first known filovirus native to Europe.

Filoviruses, which include Ebola and Marburg, are among the deadliest pathogens in humans. They are generally found in East Africa and the Philippines. The study’s findings represent a significant expansion in the geographic distribution of filoviruses.

Scientists at ISCIII analyzed lung, liver, spleen, throat, brain and rectal samples from 34 bats found in caves in Asturias and Cantabria, Spain, following a series of bat die-offs in 2002. They screened these samples for a range of viruses using the polymerase chain reaction, a technique that allows scientists to amplify genetic material, and detected a filovirus.

Gustav Palacios, one of the lead authors on the study, commented:

The detection of this novel filovirus in Spain is intriguing because it is completely outside of its previously described range. We need to ascertain whether other filoviruses native to Europe exist, and more importantly, if and how it causes disease.

Filoviruses usually don’t make bats sick, but because the researchers only detected Lloviu virus in bats that had died and whose tissues showed signs of an immune response, they think Lloviu may be a cause for concern. Bats play important roles in plant pollination, spreading plant seeds and controlling insect populations. Diseases that attack bat populations could therefore have dramatic ecological and health-related consequences.