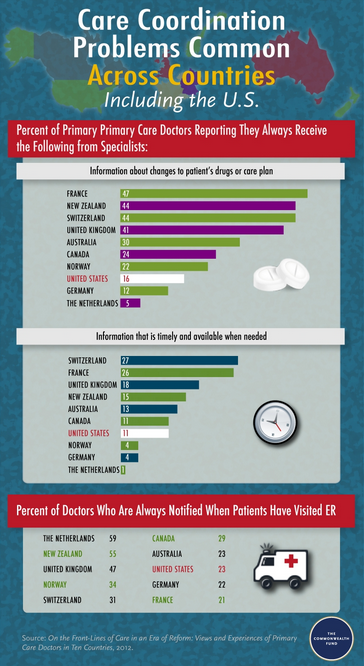 A survey of 10 countries shows doctors in the US are increasingly using electronic medical records but believe overall health reforms are needed.

An international survey of 10 countries has found progress in the use of electronic medical records (EMRs) by doctors. The United States stands out as making good progress, though it still lags behind other countries where EMRs are near-universally used.

The study looked at wealthy countries which are making health reforms in order to better meet the needs of aging populations and manage chronic conditions. The team, led by Commonwealth Fund researchers, aim is to learn about doctors’ experiences during health reforms.

The results showed, in the U.S., over half of doctors report patients have trouble affording health care. In each nation doctors contend with communication and care coordination challenges. U.S. doctors were also the most negative with regards to their national health system, with only 15 percent saying it needs only minor changes.

Two-thirds (69%) of U.S. primary care physicians reported using EMRs in 2012, up from less than half (46%) in 2009. Both U.S. and Canadian doctors expanded their use of health information technology (HIT), though the two countries lag behind the U.K., New Zealand, and Australia in EMRs and use of HIT to perform a range of functions, like generating patient information or ordering diagnostic tests.

For expats, having an EMR makes it much easier to transfer records when moving country and providing access to a new doctor abroad is simpler with an electronic record.

National policies – including those dealing with insurance structure, HIT and access to care – make a big difference say the report’s authors. For example, all the countries in the report, except the U.S. and Canada, have systems in place for ensuring patient access to primary health care outside office hours.

The responses from American physicians indicate a need for reform, including enhanced access to care. The Affordable Care Act (Obamacare), whose major health reforms come into force in 2014 should go some way to lowers the barriers to care for many Americans.