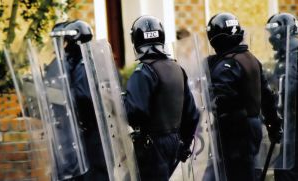 People protested in Madrid against the government cuts which would deny many non-legal immigrants access to free health care.

Spain has announced further health spending cuts, this time affecting immigrants. The cuts, expected to save €1.5 billion a year, will leave large numbers of illegal immigrants without access to healthcare. This decision contradicts a main pillar of Spain’s welfare policy, free healthcare for anyone in need.

The government puts the number of people potentially affected at 150,000. Other estimates put the figure as high as 900,000. The cost cutting measure allows few exceptions, care during pregnancy, childbirth and postpartum emergencies being some of them.

“In any case, foreigners under the age of 18 will continue to receive health care under the same conditions as Spanish nationals,” a ministry statement said.

Some 300 people blocked the ring road around Spain’s capital Madrid last Saturday to protest the cuts. Doctors and nurses were among the protestors as well as those who will be affected. Not all of Spain’s regional health authorities are implementing the measure. Seven out of the 17 authorities have refused it.

Many of the undocumented immigrants who do not contribute to taxes or social security are going to lose their health cards which entitle them to free healthcare.

“Immigrants have in their time been a cheap source of labour, and now that they are no longer of any use, they are being sent to the slaughterhouse,” 51-year-old Peruvian Rodrigo Rojas, told AFP.

Rojas said he had come to Spain 15 years ago and set up his own construction firm, which folded in 2009 when the country’s property market collapsed. Suddenly without a job, he had his residency permit withdrawn and he now found himself among the thousands denied full access to free health care.