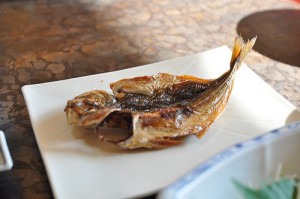 Eating broiled fish on a weekly basis could reduce the risk of developing Alzheimer's by 500%.

Fish has long been touted as a food that can reduce the risk of heart attack and stroke.

But people who eat baked or broiled fish may also be lowering their risk of both mild cognitive impairment (MCI) and Alzheimer’s disease, according to researchers at the University of Pittsburgh.

Alzheimer’s is an incurable, progressive disease that slowly destroys memory and other brain functions. In MCI there is also memory loss, but not to the same degree. People with MCI often develop Alzheimer’s later on.

The Pitt study followed 260 “cognitively normal” patients, 160 of whom ate fish on at least a weekly basis (the majority 1-4 times a week). Their brains were then scanned and mapped both at the start of the study and at its conclusion 10 years later.

The ultimate goal was to see whether volumes of gray matter (a brain material made up of neurons) would increase or decrease based on fish consumption. Declines in gray matter volume are usually associated with cognitive impairment, such as memory loss.

Results showed eating baked or broiled fish on a weekly basis was associated positively with gray matter volume in several areas of the brain, reducing the 5-year risk of decline to MCI or Alzheimer’s by nearly 500%.

Working memory, which allows people to focus on tasks and commit information to short-term memory, is one of the most important cognitive domains. Working memory is destroyed by Alzheimer’s disease. We found higher levels of working memory in people who ate baked or broiled fish on a weekly basis, even when accounting for other factors, such as education, age, gender and physical activity.

Unfortunately eating fried fish showed none of the same benefits.