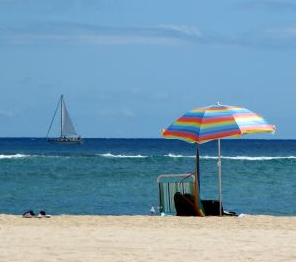 An EU project is highlighting the need for northern Europeans to be aware of UV exposure, whether at home or on holiday.

According to experts, people receive most of their exposure to harmful UV radiation at home, rather than on holiday. This means expat who move abroad in search of a sunnier lifestyle should still be aware of the risks of radiation from sunlight.

The results highlight the need to educate people on the health risks associated with exposure to harmful rays at home, not just in the summer time and when they go on holiday. UV levels were shown to be the same in Nordic countries in late spring and early summer as in Germany or even France.

The dangers to human health from too much UV radiation are very clear and one of the aims of the EuroSun project was to document the extent of exposure across EU countries. The project created an atlas illustrating UV exposure in Europe.

The results of the project were quite surprising. For example, in May there UV radiation levels are lower in northern Germany than in southern Sweden, which is due to cloudiness. However, the public aren’t always aware of this and are more likely to assume radiation is more harmful in full sunlight and in southerly, warmer regions.

Where temperatures are lower, people don’t tend to feel UV radiation as strongly, leading to higher incidences of skin cancer in northern Europe. Some of the data can be explained by cultural differences, southern Europeans know they should avoid the sun at peak times of the day and use protection.

The increasing mobility of Europeans between countries and economic development comes increasing affluence, and holidays in the sun are within reach of more people than ever before. Northern Europeans tend to travel to warmer countries such as Malta, Spain and Greece with little knowledge of the increased UV exposure. Between 70-75% of Norwegians take holidays abroad, resulting in Norway having one of the highest rates of skin cancer in Europe.