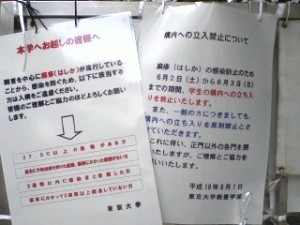 Signs warn of a measles outbreak. Measles has been on the rise in 2011.

Significant measles outbreaks have been reported on three continents so far in 2011. The World Health Organization (WHO) now has a summary available on its website, broken down by geographic area.

Europe: As of Septmber 20th, 26,000 cases of measles had been reported in 40 of 53 WHO European region member states. 14,000 of these were in France. 11 of all cases have been fatal. Countries have responded by changing their vaccination schedules, offering free vaccinations at schools and generally increasing the availability of vaccines.

Africa: Predictably countries in Africa have been harder hit–there have been 103,000 cases reported in the Democratic Republic of Congo, 17,000 in Nigeria, 5,400 in Zambia and 2,900 in Ethiopia.

Americas: Significantly fewer cases have been seen in the Americas. 740 in Canada, 213 in the US and a handful in Ecuador, Brazil, Columbia, Mexico and Chile. According to WHO, most of these cases have been imported from Europe.

In its statement WHO emphasized the risks going forward:

Measles is a highly infectious disease that causes complications and deaths, even in previously-healthy individuals, but is fully preventable by vaccination. Countries need to ensure that they reach 95% coverage with two doses of measles vaccine across all age groups up to 15 years of age. Otherwise the country will experience measles outbreaks with large numbers of cases, associated hospitalizations and deaths.

The recent outbreaks in countries with high volumes of international travellers can lead to measles exportation to regions previously free of measles, such as the Region of the Americas or certain African countries.

WHO advised travelers to ensure they have two doses of measles vaccine prior to their trip.